The foundation of Kumasi Asante Kotoko Sporting Club was laid by 13 young Ashanti men led by a young driver, Mr. Kwasi Kumah, ably supported by L.Y. Asamoah an electrician.[3][4] Mr. Kwasi Kumah, a native of Nyankyerenease near Kumasi in the Ashanti Region, was a chauffeur to an English man and military officer, a Colonel Ross.[3][4] Kwasi Kumah nurtured the idea of forming a football team when he watched an exciting football match.[3][4] When Colonel Ross returned home for good, Kumah bought a set of jerseys to start his football team.[3][4] With co-operation from his good friend, L.Y.Asamoah, he formed the Ashanti United Football Club in 1926.[3][4] Five years later the team was renamed Kumasi Titanics.[3][4] The team was really handicapped because most of the players worked in government organizations like the Prisons and Railways and had been transferred from Kumasi.[3][4] “Kumasi Titanics” did not find enough luck in their new name and in 1934 they adopted a more powerful name, Mighty Atoms.[3][4] Still the club did not see much progress and in 1935, Mr J.S.K. Frimpong, popularly called Teacher Frimpong, then a teacher of the Kumasi Government School who had all the time shown interest in the club, organized some men from his school and proposed a change of name from “Kumasi Titanics” to Kumasi Asante Kotoko Football Club.[3][4] Permission had to be obtained from the Asantehene (King of the Kingdom of Ashanti) because the name “Kotoko”, meaning “Porcupine” is the official symbol of the Ashanti nation.[3] The Asantehene, Nana Sir Osei Agyeman Prempeh II, became the first life patron of the club.[3] Kumasi Asante Kotoko Football Club was subsequently formally founded in 1935.[3][4]

Asante Kotoko’s emblem features the “Porcupine”, displaying an inbuilt arsenal of sharp spikes for use when attacked by an enemy.[4]

The Accra Sport Stadium disaster occurred at the Ohene Djan Stadium, Accra, Ghana on May 9, 2001. Ghana’s most successful football teams played that day, the Accra Hearts of Oak (The Phobians) Sporting Club and the Asante Kotoko. Accra had two late goals and a referee would call 2–1 Accra, resulting in disappointed Kotoko fans throwing plastic seats and bottles onto the pitch. The police responded by firing tear gas into the trapped crowd. Panic and a stampede ensued as fans tried to escape. After the hour-long ordeal, it was found that 117 deaths resulted from compressive asphyxia and 10 fans died from trauma.[5]

In January 2020 the team was banned from the Baba Yara stadium temporarily, after violent reactions by their supporters, which led to one of their fans being hit by a rubber bullet that was fired by the police. The fans were seen in various footages, throwing projectiles onto the pitch, because they were displeased with a decision the referee made. This happened in a match that they played against Berekum Chelsea.[6] A GFA ruling, fined the club 20,000 Ghana cedis and the next three games that they would play in the league would be behind closed doors.[7]

In July 2011, Asante Kotoko and English Premier League club Sunderland signed a partnership agreement, which will see Sunderland offering practical support and advice in youth coaching, player development, fitness and medical matters as well as football business strategy to Asante Kotoko.[8] In January 2002, P V Obeng was appointed as the board chairman of the Board of Directors of the club.[9]

The porcupine on the National Emblem of the Kingdom of Ashanti; The “Porcupine Warriors” is the Asante Kotoko nickname.

Asante Kotoko’s emblem is symbolizes the national emblem of the Kingdom of Ashanti (Kingdom of Asante) and Ashanti with the colours black, green and yellow enclosing the colours on the national flag and ethnic flag of the Kingdom of Asante and Asante Kotoko’s emblem [also represents the national emblem of the Ashanti people and the Ashanti nation (who are more like the Catalan people and Catalonia); the Asante Kotoko emblem features a remarkably threatening looking porcupine and the motto “Ashanti Twi: Kum apem a, apem beba“, which means “If you kill a thousand, a thousand more will come”.[4]

Asante Kotoko is the 6th biggest football team and professional club in Continental Africa and arguably the biggest club in Ghana; Asante Kotoko has a speculated ten million (10,000,000) followers and in the year 2011, Asante Kotoko and Sunderland AFC respective club executive Chairmen’s engaged in strategic and positive discussions on both clubs collaborating.[12] The Asante Kotoko strategical partnership sees Sunderland of the Premier League sharing its coaching and business expertise with Asante Kotoko, offering practical support and advice in youth coaching, player development, fitness and medical matters and football business strategy.[12] Kotoko in turn works closely with Sunderland AFC to help the Premier League club build and grow its brand in the emerging African territory and geographic Africa.[12]

The owner and life patron of Asante Kotoko sports club is the Asantehene, King of the Ashanti Region of Ghana, Osei Tutu II.[13] The GH150 million per annum (per season) Asante Kotoko squad players salary wage bill for 2015 and further additional GH105 million per annum (per season) squad players transfer wage bill for 2015 is financed from the large and industrial mineral rich economy of Ashanti with Ashanti being the 2nd largest producer of theobroma cacao and cocoa in the world as most of the world’s cocoa is grown in Ashanti.[14] 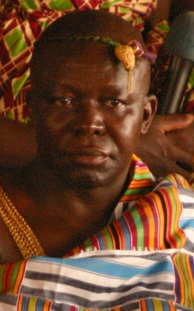 Ashanti is a top-10 producer of gold bars and gold bullions in the world as Ashanti is also a major site of the world’s gold-mining industry with Ashanti being home to the world’s 10th largest producing gold mine on Earth; The Obuasi Gold Mine.[15] The 1 ton of Gold bars and Gold (Bullion) is worth $64.3 Million dollars (US$64,300,000) at $2000/oz.[16]

In November 2020 a partnership agreement was signed between the club and Hisense Ghana. This made Hisense, an electronics manufacturer, the club’s official electronics partner from 2020 till 2023.[18]

Asante Kotoko training ground and training facilities headquarters, are located in the capital city of the Ashanti nation, Kumasi.[20] There is ongoing construction of the “Asante Kotoko Adako-Jachie Training Complex” which when completed in 2015 will consist of three training pitches, one artificial grass pitch, multi-functional sports hall, Olympic-size swimming pool and a 20-bedroom camping facility for Asante Kotoko at Adako Jachie suburb situated on the outskirts of Kumasi.[20] The “Asante Kotoko Adako-Jachie Training Complex”; three training pitches and the 20 bedroom facility will come with a large multi-operational health club and gym, weights for strength training and physical fitness area, a massage unit, dressing rooms, the technical staff’s and coaches’ office, as well as a conference room with screening facilities and offices for the Asante Kotoko Chief operating officers (Operations Director) and the technical bench.[20]

@wp_updates Hey WP Updates, There is an issue with auto-updates - all updates come with error:… https://t.co/E5aULz4RSU

Reply Retweet Favorite
@Josh__aj We’re not owner of that site. This is website from a customer has purchased our theme. We just selling Wo… https://t.co/DTF7gN1WbS

Reply Retweet Favorite
@iamFRANQ @Naijaknowhow Hi, Can you tell me where do we use your content? Do you know we're a company work for sel… https://t.co/udWd8ULHvG

Reply Retweet Favorite
@nuysink Hi, Thank you for loving our theme. Please send us an email via our contact form: https://t.co/JZEY1EfBio… https://t.co/cs8uftDWjN