Ahwoi predicting the defeat of NDC in…

Sleeping NDC has no message, no manifesto…

I never knew toilets could make it… 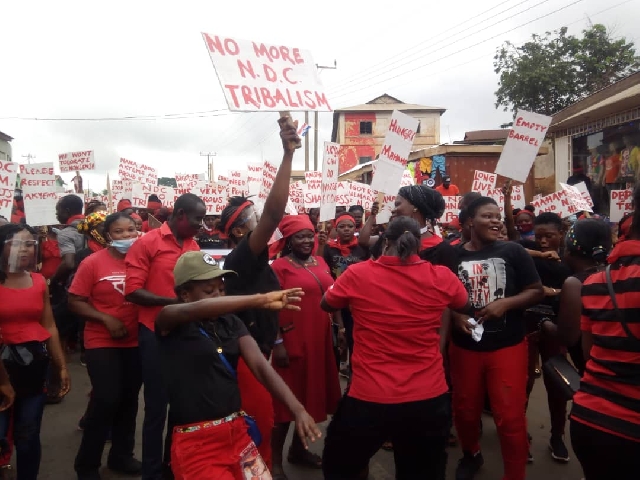 A group known as the Concerned Citizens of Okyeman are today, Wednesday, 9 September 2020 demonstrating to register their displeasure over what they refer to as unsavoury comments made by the Flagbearer of the opposition National Democratic Congress (NDC) John Dramani Mahama against Akyems.

The protestors clad in red and black and wielding placards gathered at the forecourt of the centre close to the lorry station at Asamankese to begin their protest.

Some of the placards read “No more NDC Tribalism”, “Nana Addo, Akyems are proud of you,” “Empty Barrel,” “Long Live Akyems” among others.

Mr Mahama shared on social media, a statement authored by NDC MP Isaac Adongo, in connection with controversial Agyapa Royalties deal, in which he described the President and some government officials as ‘Akyem Sakawa people’.

In the said post, Mr Adongo accused President Akufo-Addo of forming a family-and-friends cartel to capture the mineral resources of the state.

The Facebook post was later shared by Mr Mahama, on 31 August 2020, evoking divergent sentiments among his followers.

“Even that one, nobody has said that it constitutes sakawa.

“Somebody comes in, like Akufo-Addo and we go to the Supreme Court and we retrieve these resources, we leverage it with the sinohydro deal and that is what is giving the people of Tamale the interchange, that is what is building all these eastern corridor roads, the innercity roads in Cape Coast, etc.

“So, you that you steal our resources and give it to your brother, somebody comes and takes that resource and is leveraging it for the benefit of the Ghanaian people, you and that person, who qualifies to be called sakawa?” Dr Abdul-Hamid asked.

“So, really and truly, I think that we should call a spade by its name”, Dr Abdul-Hamid said.

At a meeting with the Ghana Catholic Bishops’ Conference at the Jubilee House on Friday, 4 August 2020, President Nana Akufo-Addo not only said he was “very disturbed” by the ethnocentric tagging of his ethnic group but also noted that “that is the kind of language we don’t want in our politics.”

“Sometimes, one would hope when things come out, people will comment on them. The comment made by my opponent: ‘Akyem Sakawa’ people, I have not heard any public figure in this country or anybody comment on it.”

“If I was to get up to make a comment about northerners or Gonjas, you can imagine the uproar that will be in the country,” the President bemoaned.

Responding to President Akufo-Addo’s complaint, Mr Mahama said his successor has no right to complain about the ‘Akyem Mafia’ and ‘Sakawa Boys’ tags used to describe some of his “friends and family members” serving in his government, who are behind the “shady” and “untidy” Agyapa Royalties deal.

Don’t vote for Mahama else the Ghana moves backwards- Bawumia

The President looked like the innocent flower but he is the mother corruption serpent under the innocent-looking flower – Martin...

Mourinho hasn’t been tipped off about Chelsea team again… yet

Drake sides with The Weeknd, says Grammys ‘may no longer matter’

John Mahama will be the next president of...

Playback: Akufo-Addo’s address to the nation on measures...

@wp_updates Hey WP Updates, There is an issue with auto-updates - all updates come with error:… https://t.co/E5aULz4RSU

Reply Retweet Favorite
@Josh__aj We’re not owner of that site. This is website from a customer has purchased our theme. We just selling Wo… https://t.co/DTF7gN1WbS

Reply Retweet Favorite
@iamFRANQ @Naijaknowhow Hi, Can you tell me where do we use your content? Do you know we're a company work for sel… https://t.co/udWd8ULHvG

Reply Retweet Favorite
@nuysink Hi, Thank you for loving our theme. Please send us an email via our contact form: https://t.co/JZEY1EfBio… https://t.co/cs8uftDWjN