Former local government minister Prof. Kwamena Ahwoi has in his book ‘Working with Rawlings’ stated that late President Mills advised his close confidant and former Director of Communications at the presidency Koku Anyidoho not to attack the founder of NDC former President Rawlings as others did.

The book has generated controversies after it was released with the author in his account of events saying some of the young party members including MP for North Tongu, Samuel Okudzeto Ablakwa, and the former communications minister Dr. Omane Boamah were recruited to tame Mr. Rawlings for consistent attacks on the late Mills.

These are the politicians Mr. Rawlings named “babies with sharp teeth”.

However, the two have refuted the accounts in the book saying there are malicious, false, and did not represent the truth.

Giving an account of Mr. Anyidoho, the local governance expert said: “Koku Anyidoho gives his own version of President Mills’ frustrations over this matter as follows: “Being the ever-forgiving and non-confrontational person President Mills was, he never called any of his aides and asked us to go on a headlong collision with the founder.”

According to his account in the book, Prof. Ahwoi quoted Mr. Anyidoho as saying: “On the contrary, he once told me never to be deceived by anybody to attack Rawlings, because once I do that it will be the end of my political career”.

Read the excerpts of the book below; 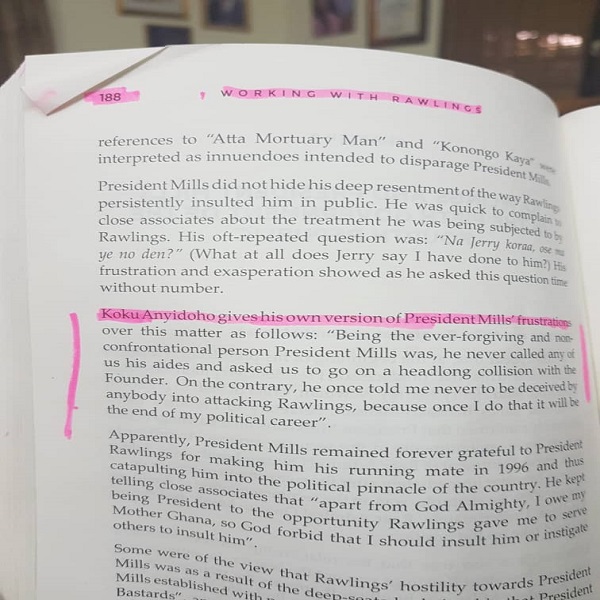 The Jinapors: Portrait of a family in Ghana politics